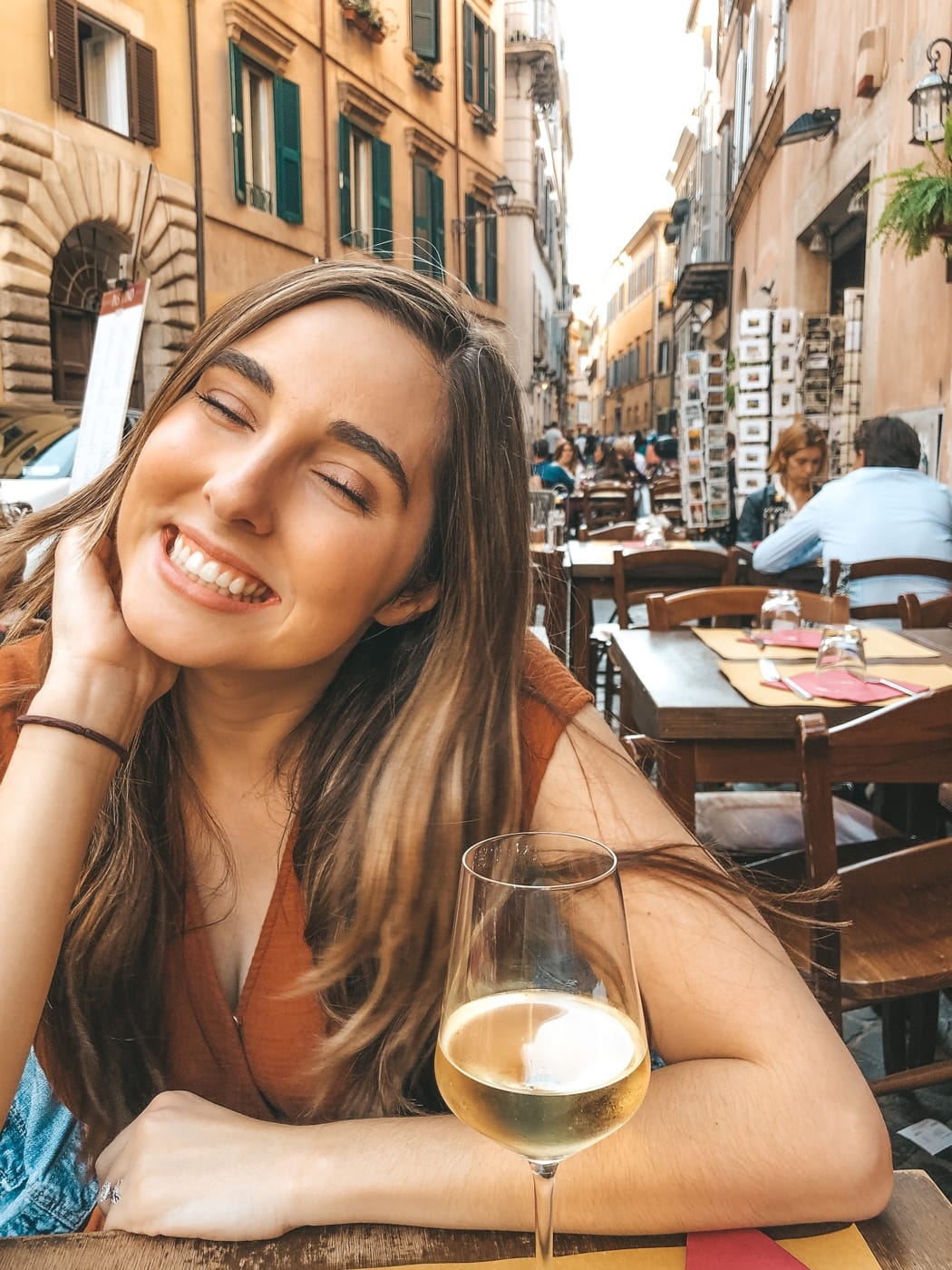 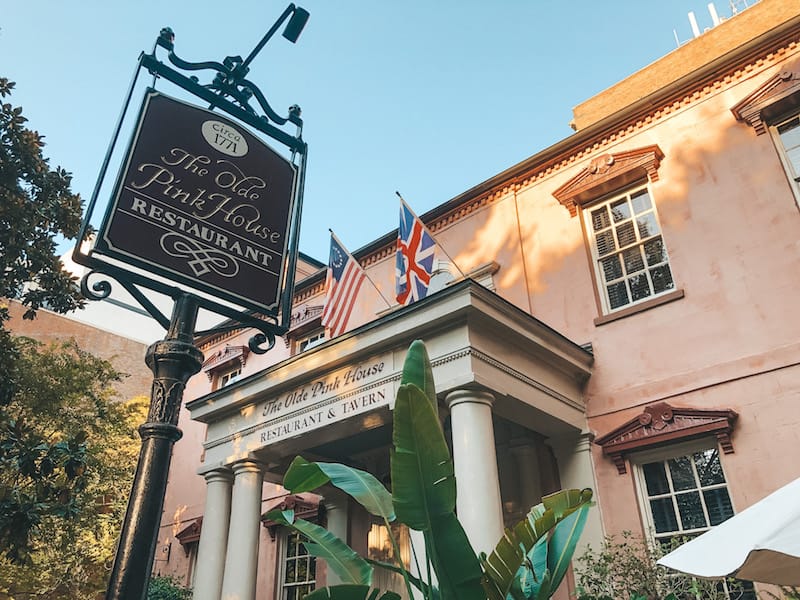 Before I visited Savannah, I was excited to stroll through the mossy oak trees, explore the breathtaking mansions, and eat ALL the delicious, southern comfort food. However, I had no idea how much I would fall in love with the history and charm of haunted Savannah!

My husband and I visited Savannah in early October. With Halloween just around the corner, we couldn’t have chosen a better time to explore haunted Savannah’s spooky secrets.

The History of Haunted Savannah

General James Oglethorpe founded Savannah in 1733 and became Georgia’s capital—the thirteenth and final of the original colonies. After enduring deadly diseases, gruesome battles, mysterious murders, devastating fires, and decades of horrific slavery for nearly 300 years—it’s no wonder that Savannah is so haunted!

Whether you plan to visit Savannah soon or just want to get in the spooky spirit, here are six haunted spots you can’t miss when visiting Savannah!

The Mercer-Williams House is one of the most haunted Savannah locations. John Wilder completed construction on the house just after the Civil War in 1868. The house was initially designed for Hugh Mercer, a general in the confederate army. No one from the Mercer family ever lived in the house, despite the name.

The Mercer-Williams House was made famous by the novel, Midnight in the Garden of Good and Evil, published in 1994. The book was adapted into a movie, directed by Clint Eastwood, in 1997.

During one of his parties in 1981, Williams shot and killed his assistant and lover, Danny Hansford. After being tried four times for murder, Williams was ruled not guilty, saying that he killed Danny out of self-defense—but did he, really?

Just six months after the verdict, Williams collapsed and died from a heart attack in his home—just feet away from where Danny died just years earlier. Suspicious, right?

Tommy fell directly on a spike from the wrought-iron fence. The spike was sawed off to remove his body. You can still see the missing spike when you visit the Mercer-Williams House today.

Some suggest that Tommy was pushed—or even thrown—to his death. Perhaps this story led to the evil told in the Midnight of the Garden of Good and Evil.

Tour the Mercer-Williams House during your visit to haunted Savannah, but beware—the Williams family still owns the home, so you probably won’t hear much about murders, haunted spirits, or the ghost of Jim Williams during your visit.

I highly suggest doing your research before visiting Savannah by either reading or watching Midnight in the Garden of Good and Evil! It will make your visit to Savannah dynamic and engaging.

Both the book and the movie are available on Amazon.

If you become interested in the story and want to learn more about the places and events in Midnight in the Garden of Good and Evil, I suggest this walking tour while you are in Savannah!

Colonial Park Cemetery was established in 1750 and is the oldest municipal cemetery in Savannah that is still intact. The cemetery closed to interments in 1853 and contains more than 9,000 graves.

Over the years, the cemetery became the resting place of many afflicted souls—from the soldiers who died in the Revolutionary War to victims of the Yellow Fever outbreak in 1820.

During the Civil War, occupying Union soldiers made the cemetery their temporary home. Soldiers stayed in the burial vaults—and moved many bodies and changed the dates on tombstones while they were there.

Perhaps this is why the cemetery is full of angry spirits. Regardless of the reason, you can’t miss the chance to visit the Colonial Park Cemetery during your visit to haunted Savannah. Just be sure to visit during the day—the cemetery closes at 8 PM every night.

The Hamilton-Turner Inn is one of the most haunted homes in Savannah. Built in 1873, the home was the first in Savannah to have electricity.

Multiple ghosts wander the hallways of the Hamilton-Turner Inn. The most prominent ghost that haunts the inn is a man accompanied by the smell of cigar smoke. Many spectate that this ghost was a former guard at the Hamilton-Turner home who protected Hamilton’s extensive collection of valuable artworks.

The guard stood on the balcony, pacing back and forth, with a cigar and rifle in hand. One day, someone viciously shot the guard in the back of the head during his post. He was later found dead with a burnt-out cigar nearby.

Lafayette Square is built on a Civil War burial ground. Many people speculate that the cigar-smoking ghost is a Confederate soldier, still struggling through the war’s effects.

Regardless of who the cigar-smoking ghost is—he haunts the Hamilton-Turner Inn. You can book a stay at the haunted bed and breakfast during your visit to haunted Savannah to see for yourself.

Fun Fact: The Hamilton-Turner Inn inspired Walt Disney when he was creating the iconic Haunted Mansion attraction at Disneyland!

Out of all 22 squares, Calhoun Square is supposedly the most haunted square in Savannah.

18th-century slaves were buried in Calhoun Square. Many people speculate that the ghosts are former slaves who haunt Calhoun Square to avenge the wrongs done to them during their lives.

From Calhoun Square, you can also see 432 W. Abercorn—one of Savannah’s most haunted homes. If you look closely at night, you might see the ghost of a little girl sitting in the window and watching over Calhoun Square. Spooky!

Mary Marshall established the Marshall House in 1851. The hotel served as a hospital during the Yellow Fever epidemic and a hospital for Union soldiers during the Civil War. After workers renovated the property, they claimed to find body parts buried under the floorboard from long-ago surgeries and amputations.

Many visitors have reported ghost sightings in the hallways and have witnessed water faucets mysteriously turn on themselves.

Stay in the Marshall House during your visit to haunted Savannah to decide for yourself if the ghost stories are true.

Fun Fact: Remember how the owner of the Mercer-Williams House, Jim Williams, was an antique collector? The oil painting of Mary Marshall in the hotel lobby is an antique from Jim William’s estate!

There are reports of ghosts in The Olde Pink House—a crying ghost upstairs, a female ghost who locks ladies in the restroom, as well as a Revolutionary War veteran who frequents the bar.

Spend an evening dining at The Olde Pink House during your visit to haunted Savannah. Who knows—your elegant dinner may turn into an evening of ghost hunting!

Regardless of whether you believe in Savannah’s resident ghosts, there is no doubt that Savannah is drenched in fascinating history. From quirky, local tales to American war stories, there is no doubt you will learn something interesting when visiting haunted Savannah.

Have you visited haunted Savannah before? Which spooky story is the most believable to you?

Disclosure: Some of the links in this post about the best haunted Savannah places to visit are affiliate links, meaning, at no additional cost to you, I earn a commission if you click through and make a purchase.

Pin This Blog about Haunted Savannah for Later!

Did you enjoy reading this blog post about haunted Savannah places to visit? If so, check out these other Travel by Brit blog posts: