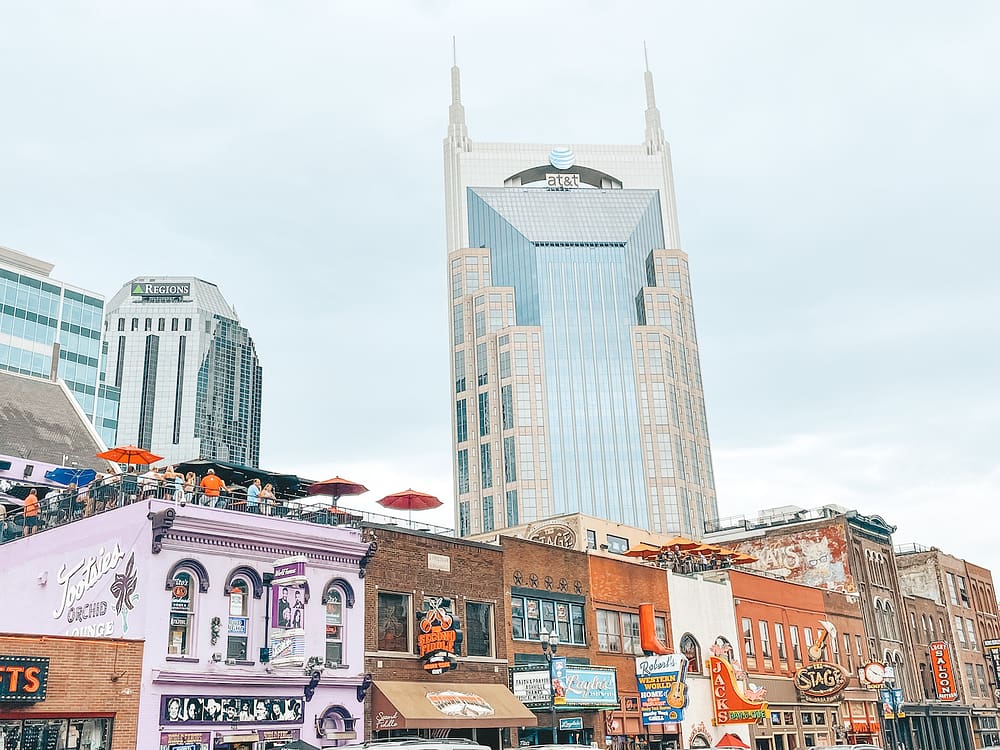 There are lots of amazing reasons to visit Nashville—from colorful murals and beautiful parks to country music history and fantastic restaurants. However, there is one activity that outshines the rest when visiting Nashville—checking out the famous bars in Nashville on Broadway Street!

Nashville has always been well-known for its honky-tonks on Broadway Street. On any given day, you could walk up and down this iconic street and smell fresh leather boots and cigarette smoke wafting together while listening to music in every bar from up-and-coming artists.

Today, Nashville has gained quite a bit of popularity and has been nicknamed “Nashvegas” because of its reputation for lively nightlife and entertainment. Well, whether you want the authentic honky-tonk or “Nashvegas” experience during your time in Nashville—these bars in Nashville on Broadway Street are the place to be!

Map thanks to Wanderlog, a vacation planner app on iOS and Android

1. The Stage on Broadway

The Stage on Broadway describes itself as “a little bit of Texas and a whole lot of Nashville.” This famous bar, located on Lower Broadway Street in Nashville, is one of the most popular country bars to visit Nashville. The Stage prides itself on offering a “dive bar” atmosphere, and you can listen to live music on any floor of this three-story establishment.

Famous country music artists like Toby Keith, Brooks & Dunn, Miranda Lambert, and others have performed at The Stage, so you never know—you may be able to watch the next big country star during your time at The Stage!

Tootsies Orchid Lounge is arguably one of the most iconic bars in Nashville on Broadway Street. This iconic honky-tonk, beloved for its “orchid” purple exterior, was established in 1960.

Jason Aldean’s Kitchen + Rooftop Bar is one of the best celebrity bars in Nashville, TN. This four-story venue is more than just a bar—it’s also a fabulous restaurant that serves great meals, like a Hot Chicken Sandwich, Prime Rib Sandwich, “Tommy” Hawk Ribeye, and more!

There are live performers on every floor of Jason Aldean’s Kitchen + Rooftop Bar, so you can listen to up-and-coming performers while you eat your lunch and dinner or enjoy a drink. While you’re at Jason Aldean’s, you have to visit the rooftop bar. It’s one of the biggest (and best!) rooftop bars in Nashville on Broadway, and it offers a great vantage point of Downtown Nashville and Broadway Street!

The Stillery is a live music venue and restaurant in Nashville, TN, with two locations—one in Downtown, on Broadway Street, and one in Midtown. They also have two bars in Phoenix, Arizona—one in Chandler and one in North Phoenix.

The Stillery is known for its signature mason jar cocktails made with moonshine and whiskey (the Whiskey Float is a must-try!). They also have an impressive food menu, so you can enjoy dinner in a more intimate setting than some of the livelier bars on Broadway Street.

Whiskey Row, unlike many honky-tonks on Broadway Street, frequently deviates from country music and plays popular club tunes. This gastropub is a can’t-miss destination on Broadway Street if you’re looking for a young, rowdier crowd.

Nudie’s Honky Tonk on Broadway Street is one of the oldest and most iconic bars in Nashville that resides in a three-story building that’s over 100 years old. Nudie’s Honky Tonk is named after Nudie Cohn, a renowned tailor who made performance outfits for Johnny Cash, John Lennon, Elton John, Elvis Presley, and other music legends!

While you’re here, you can see tons of country music memorabilia and stage costumes designed by Nudie, hang out at one of the bars, or watch live music at one of the bar’s three stages, or enjoy southern-style comfort food.

Wildhorse Saloon has line dancing lessons every Wednesday through Sunday (unless there is a private, ticketed event). If you want to learn how to dance while you’re in Nashville, strap up your boots and head over to Wildhorse Saloon.

As someone who loves dancing and live music, this is my favorite of all the bars in Nashville on Broadway! I come to Wildhorse Saloon every time I visit Nashville. It’s the best!

Robert’s Western World is one of the best bars in Nashville on Broadway Street if you want to listen to authentic country music. In fact, this honky-tonk is known as “Nashville’s Home of Traditional Country Music” and offers live music seven days a week.

Ole Red is another one of the best celebrity bars in Nashville, owned by Blake Shelton, a country music star and television personality from The Voice. Ole Red prides itself on being more than just a restaurant and live music venue. This spot serves live music seven days a week, made-from-scratch dishes, and signature drinks. Ole Red also has locations in Las Vegas, Gatlinburg, Orlando, and Oklahoma.

Old Red is built to provide a country music experience from your seat, so you’ll be able to listen to tomorrow’s up-and-coming artists while you enjoy a tasty dinner or drink. They spotlight hot new talent every month, so be sure to check who’s playing before your visit to Ole Red!

FGL House is another one of the best celebrity bars in Nashville, owned by the popular country-pop band Florida Georgia Line. FGL House offers live music daily, focusing on current country music trends, and serves up southern food with some influence from the West Coast.

FGL House boasts one of the largest rooftop bars in Downtown Nashville, called the “Cruise Rooftop Bar”, named after the country duo’s hit song that put them on the map. You can also visit Little Red Corvette, a nightclub in the basement of FGL House that serves cocktails inspired by pop music in the 1990s.

Redneck Riviera is owned by John Rich and celebrates the “American Spirit” and those who love to play just as hard as they work! In fact, the “Heroes Bar” in Redneck Riviera gives all military veterans, active duty, and first responders their first round of a 2-for-1 on all domestic beers and half-price on Redneck Riviera Jerky.

Legends Corner describes itself as a “classic dive bar experience” with great country music. Legends is one of the first stops on Lower Broadway Street, so chances are, it will be one of your first stops during a night out at the bars in Nashville on Broadway Street.

At Legends Corner, you can expect a honky-tonk experience with country music, and dancing is encouraged! If you want to practice your two-stepping, this is the spot for you. Multiple country music stars, like Toby Keith, Darius Rucker, Luke Bryan, and more, so you never know which “country music legend” you might run into at Legends Corner!

The Second Fiddle is another honky-tonk and one of the best bars in Nashville on Broadway. This popular spot offers live country music seven days a week, and like most bars on Lower Broadway, there is never a cover charge.

This spot had country music memorabilia and antique radios scattered throughout to create a memorable and authentic experience. They also have a brand-new rooftop bar where you can soak up the views on Broadway Street and enjoy great live music!

Tequila Cowboy features local and national country acts every day of the week. They also host private parties and have another location in Pittsburgh, Pennsylvania.

AJ’s Good Time Bar, founded by Alan Jackson, is one of the most popular bars in Nashville on Broadway. This honky-tonk is located in a three-story building and features a sports bar on one floor called Hullbilly Bar, with nightly karaoke and a spectacular rooftop bar.

What is the most famous bar in Nashville?

How many bars are there on Broadway in Nashville?

What are the celebrity bars in Nashville?

If you’re looking for the perfect place to stay within walking distance of the bars in Nashville on Broadway Street, check out these highly-rated hotels:

Save the Best Bars in Nashville on Broadway Street for Later

Looking for more information about Nashville, TN? Check out these related posts:

La Jolla vs. Coronado Island: Which to Visit for Vacation?